Time is a game mechanic that drives many core functionalities in the game. Time controls the day/night cycle, the growing of crops and replenishment of renewable resources, the decay of perishable items, lifecycles of sapiens and passage of the seasons to name a few.

1 game year is divided into 4 seasons, each of which has a duration of 2 game days. So 1 game Year is 8 game days. A game day without game speed acceleration is 48 real-time minutes, with 1 game hour equaling 2 minutes. These values should be used as a reference only. In reality, the player is able to speed up the game and the game itself will speed through the night once all sapiens are asleep. This will fast forward through real-time minutes, making a full day cycle rarely 48 minutes exactly. 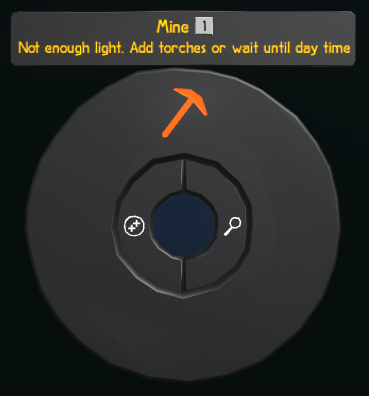 Day light is important for Sapiens to be able to complete tasks.

The Day/Night Cycle is a simulation close to that of the real world as the game at it's heart is a planet renderer. The duration of daytime is not consistent, with winter days being very short and summer days very long, as well as being affected by where on the globe your tribe is. This is most noticeable near the poles, where summer day times are extremely long and winter nights are extremely long as well.

Light is important to the productivity of a tribe of Sapiens. If there is insufficient light many tasks will not be performed by Sapiens until there is light again, and darkness also has a negative status effect on a Sapien's mood. Lighting for areas where tasks are commonly completed can be augmented with Torches, which provide additional light and sapiens will continue to work into the evening. 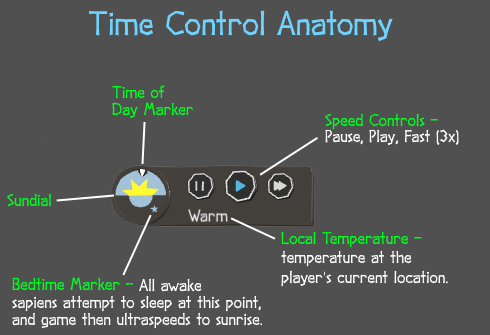 The Time Control Widget is shown in the top left hand corner of the screen in game. It contains various information about time of day as well as game speed controls and local temperature.

The Sundial on the Time Control Widget is the functional clock in the game. The passage of time is denoted by the traversal of the Time of Day Marker around the circle. Ignoring game speed changes, there are 48 real-time minutes in a game day so it would take 48 minutes for a complete traversal. In practice a game day doesn't take this long. The Bedtime Marker on the sundial is the point at which all Sapiens will try to sleep, and if they are all successful the game will Ultra Speed to sunrise (this needs to be taken into account when trying to figure out how long in real time certain items will store, etc). As mentioned earlier there is no definitive sunrise and sunset time as many factors come in to play, however a general rule of thumb is sunrise is somewhere around 6am and sunset is around 6pm.

The Time Control Widget also has buttons to control the speed of the game (see Game Speed), as well as the Local temperature. Please note this is not a seasonal temperature - this is the temperature in the position that the player is currently located.

The game currently has 5 speeds defined. 3 of the speeds are accessible from the Time Control Widget, Utra Speed is used by the game to bypass night time, and slow motion is mapped to a hotkey.

Some objects require time to dry to become usable. The following table outlines the drying time for these types of resources. Times are listed in real time, so are affected by Game Speed changes.

Items stored indoors will have a duration of 4 times the value of the decay time of the item.

Some items can only exist in containers. Containers fired in a Kiln extend the shelf life of these resources.

When looking at items in a Storage Area, an estimate is given as to how long the items will last. The below table shows the ranges for how these estimates are communicated by the game. Values in the Time Span column are in-game.

Most flora replenishes after 3 days.