Skills are one of the major mechanics of how the player interacts with the sapiens in the game. It is a system that allows the player to determine what sapiens will do what type of tasks, and how many. Skills are required to perform their related actions, and they can be learnt by investigating a specific object. Some skills cannot be performed by sapiens which are unable to perform heavy tasks (e.g. elderly sapiens). 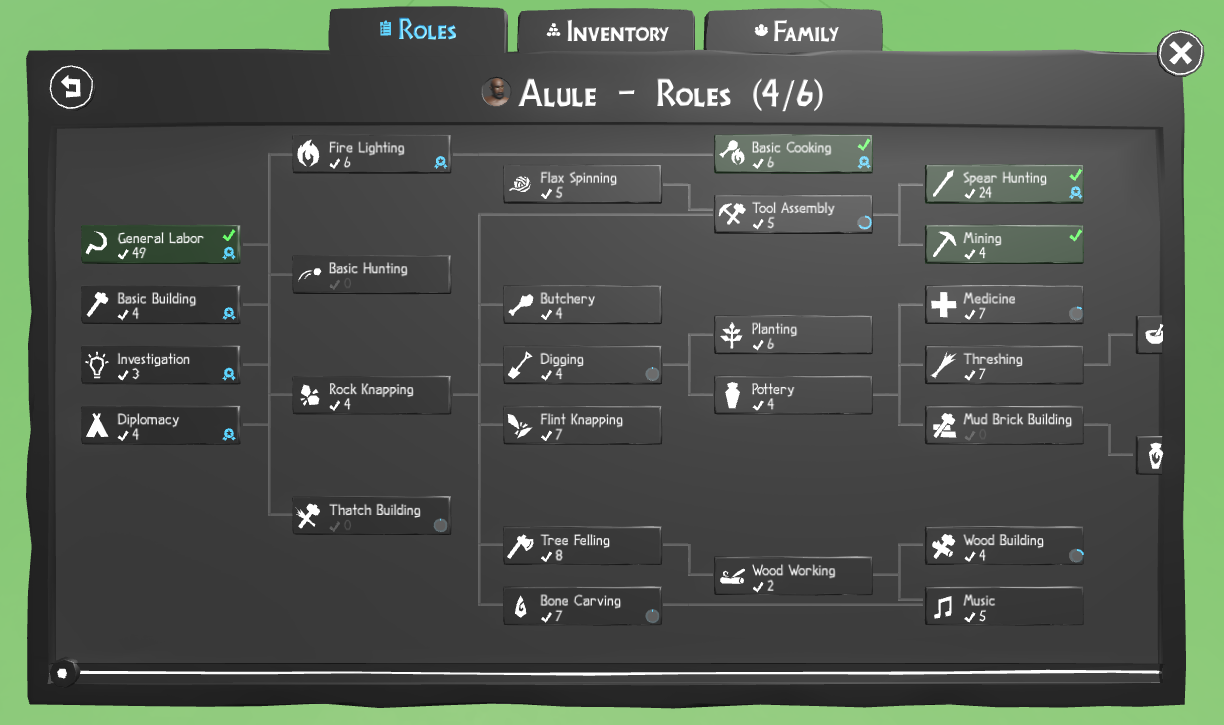 There is an important difference between a sapien having a role and having a skill, but they are tightly related. A role is the assignment of one of any of the skills to a particular Sapien for them to work on open jobs that require this skill. However the first time they attempt a task they haven't completed before, there will be delay as the Sapien learns this skill. This is represented next to the skill name as an increasing circle graph. Once this learning phase is complete they have fully learned the skill and there will be no learning delay on future tasks. This is indicated by a little Blue Ribbon with a star in the bottom right corner of the skill box in a sapien's Role Panel. The diagram to the right shows an example of these concepts.

To the right is a screenshot of a typical sapien Role Assignment Panel. In this example the sapien Alule has 4 roles assigned - General Labor, Basic Cooking, Spear Hunting, and Mining. This is indicated by the green selection color of the role and blue check mark that was selected by the player. You can also see from the blue star ribbons of the skill box that Alule is fully skilled in several skills. However, unless a sapien is assigned the role (green selection) they will not perform that job - even though Alule is skilled in Basic Building, Investigation, Diplomacy and Fire Lighting he will never do one of these open jobs as he has not been given the role to complete jobs of these skill types.

You can see Alule is also assigned the Mining Role, however he is not skilled in it as there is no blue star ribbon or progress indicator. This means Alule will take a mining task to be completed, however the first time he attempts to mine something it will take a while for the skill to be fully learned. You can see from his Tool Assembly skill he is about 3/4's complete, however he will make no more progress on this skill until he is actually assigned the role.

Anatomy of the Skill Box 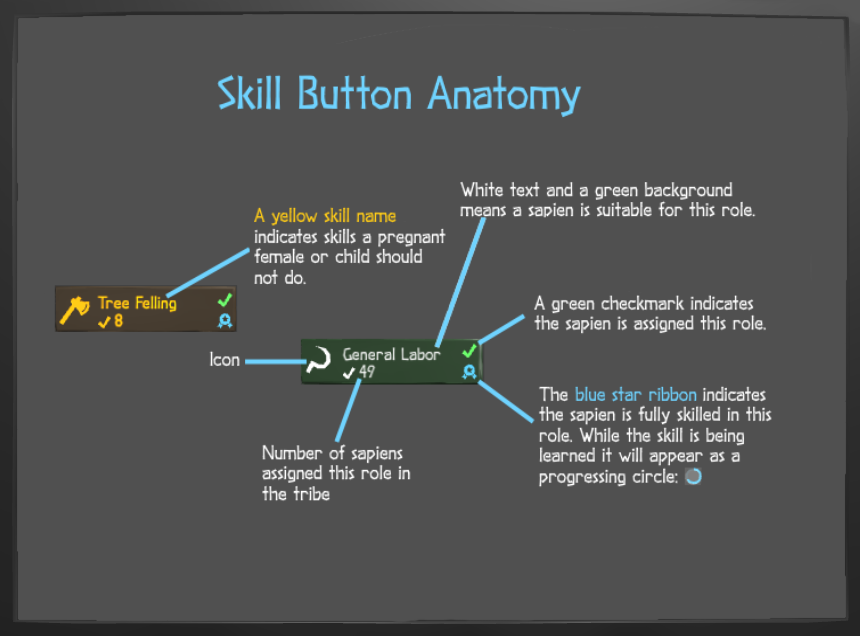 Anatomy of the skill box.

A significant amount of information is relayed on the skills box found in the "Manage Sapien" view. The diagram shows the different indicators present on the skills button.

The skill name and icon indicate the skill type. The color of the text and icon indicates if this particular skill is suitable to be assigned to this sapien. There are skills that require heavy lifting and will not be suitable for pregnant sapiens or children to do. These skills will be highlighted this way in the Roles Management panel for children and pregnant women. While these skills do not show up as yellow for elders, it's generally advised not to assign them to heavy lifting roles as they tire easily and move slowly making them ineffective.

A blue star ribbon represents that the sapien has fully learned this particular skill. While a sapien is learning a skill this area will show a circular progress indicator that progresses as the sapien learns the skill.

This number represents the total of all sapiens who have been assigned this skill. This is an easy way to see where there are shortages of a particular skill slowing down a large job.